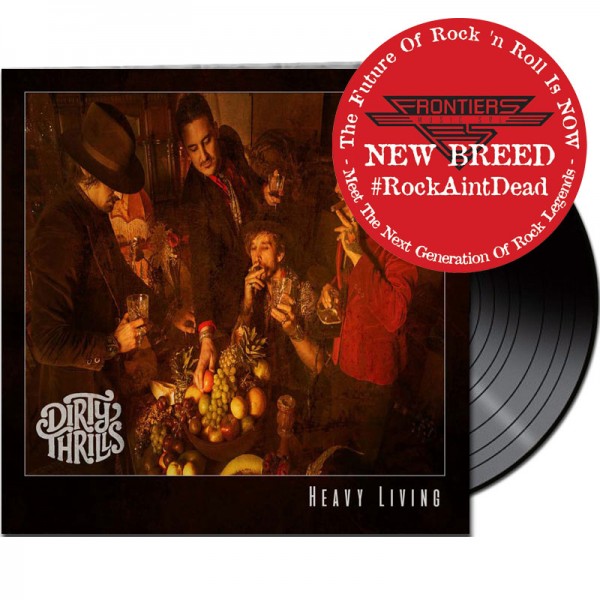 DIRTY THRILLS are part of Frontiers’ New Breed family. The New Breed family is the label’s stable of young, exciting, up and coming bands who will be the future of hard rock and metal. The label is focused on finding and developing new bands that will show the world that rock is indeed far from dead.

Dirty Thrills are an exciting and charismatic bluesy hard rock quartet from London, UK. Fronted by the son of ex-Moody Blues singer Nicky James, this unique outfit are bringing back old school rock ‘n’ roll, while all the while applying their oh-so-appealing filthy edge to it. With lung-busting, powerful vocals from Louis James, killer guitar riffs from Jack Fawdry and solid, sexy low-end grooves from the rhythm section of Aaron Plows and Steve Corrigan, they are churning out crowd pleasers whilst all the while endeavouring to make guitar music sexy again. Their influences flow like a stream of innumerable genres to produce a pool of sound similar to current rock icons like Queens of the Stone Age, The Black Keys, and Rival Sons, while also taking care to include lashings of clever guitar riffs and vibrant Robert Plant-esque vocal lines.

The band formed after a successful drunken jam night in a quiet village pub in Wiltshire, and what started out as an inconspicuous session, quickly birthed an ambitious group with the drive and determination to take the rock scene back to its glory days.

Having already plied their trade in such venues as London’s 100 Club, the main stage at O2 Academy Liverpool, and Shepherd’s Bush Empire, as well as having been given airtime on BBC Radio 2, the sky really is the limit for this earnest group of youngsters.

The band played the Camden Rocks Festival in June 2017 and will be playing (or will have played, depending on when you read this) The Wildfire Festival and Ramblin’ Man Fair as well. Loads more touring is on the horizon for the band in conjunction with the release of “Heavy Living”.