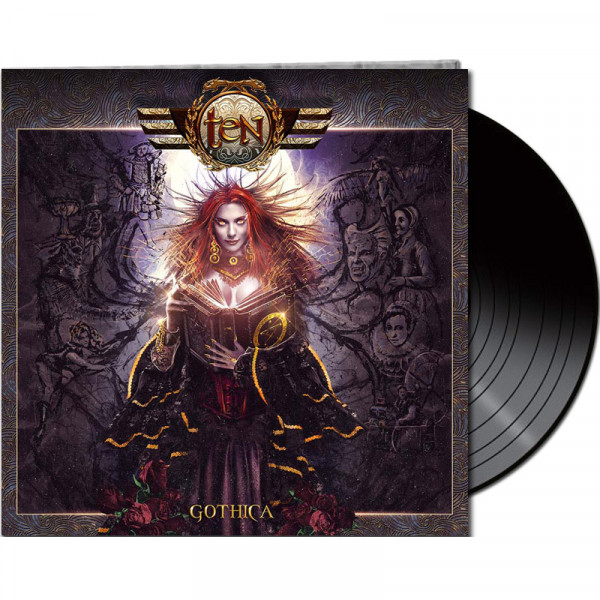 The highly anticipated new album, “Gothica”, from TEN promises to be one of their strongest collection of songs to date. It is full of all the trademark textures and flavours we have come to expect from TEN, arguably one of the best and most consistent melodic hard rock bands in the genre.
“Gothica” renews TEN’s longstanding association with the Frontiers label and proudly displays all the hallmarks of classic TEN albums and will surely continue to build upon the rich legacy that the great British rockers have forged over a career spanning 22 years and counting.
“Gothica” emerges as their darkest album to date. Embracing history, romance and erotic horror in equal measure as it does, the title proves to be a fitting name. As listeners, we are transported from the darker side of human nature to the nocturnal supernatural, a dramatic realm of nightmares and the forbidden. “Gothica” is cinematic in every sense of the word. A web of musically elaborate spells, evoking embers that spark the imagination courtesy of the classic song writing of vocalist Gary Hughes.
Following their success on the recent albums “Albion” and “Isla De Muerta”, Hughes is joined once again by guitarists Dann Rosingana, Steve Grocott and John Halliwell along with bass player Steve McKenna, keyboard maestro Darrel Treece-Birch, and drummer Max Yates. On their third outing as a collective unit, the musicians in TEN have raised the bar even higher than they had previously. The album is full of stunning guitar work over a rich keyboard, bass, and drum tapestry with Hughes’ rich vocals once again bringing the nuances of the intricate lyrics to life.
“Gothica” was produced by Gary Hughes and mixed and mastered by Dennis Ward. TEN’s longstanding professional association with Dennis has been ongoing since he mixed their 2011 album, “Stormwarning”.
Additionally, the album features stunning original artwork by Stan W. Decker, depicting a beautiful enchantress reading incantations from a book whilst summoning shadowy characters from its pages. Stan has cleverly illustrated the piece in order to portray the characters emerging from the books pages as the actual characters from the songs on the album.

The Grail; Jekyll And Hyde; Travellers; Man For All Seasons; In My Dreams; The Wild King Of Winter; Paragon; Welcome To The Freak Show; La Luna Dra-cu-la; Into Darkness.