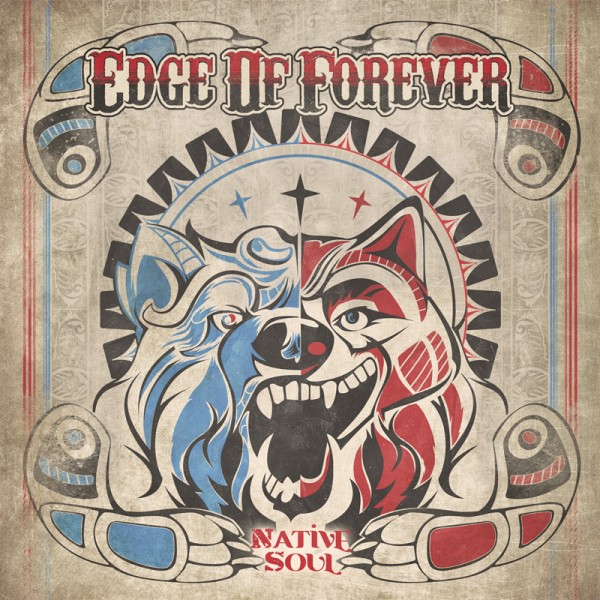 With a revived line-up featuring founding member, producer, singer and keyboardist Alessandro Del Vecchio, guitarist Aldo Lonobile (Secret Sphere), bass player Nik Mazzucconi (Labyrinth) and drummer Marco Di Salvia (Hardline), Edge Of Forever are now ready to release “Native Soul”, their strongest album to date which heads back to the heavier, but still melodic, sound of their acclaimed debut album.
Originally formed by Del Vecchio in 2002, Edge Of Forever released three very well received albums: “Feeding The Fire," produced by Marcel Jacob (Yngwie Malmsteen, Talisman) and “Let The Demon Rock’n’Roll”, produced by Bobby Barth (Axe, Blackfoot), both featuring Bob Harris (Axe, Frank Zappa) on vocals and “Another Paradise” which saw Alessandro Del Vecchio take the lead vocal spot and production duties.
Years of artistic collaboration between Alessandro Del Vecchio and Frontiers are by now synonimous of amazing records and “Native Soul” is not an exception! Anthemic songs, epic choruses, bombastic production and a deep, strong vocal perfomances are the foundation of the album.
Since Alessandro Del Vecchio teamed up with Frontiers he became a reference name in the Hard Rock world, being the producer, songwriter and musician behind successful top charting albums with the likes of Hardline, Jorn, Revolution Saints, The End Machine, Find Me, First Signal, Harem Scarem, House Of Lords and many others. Beside being one of the most talented musicians in the scene, Alessandro is also known for his high tenor soulful voice. Aldo Lonobile was the first choice when the band was ready to enter the studio. Loaded with a great attitutide and undeniable talents, Aldo’s guitar playing fits like a glove to Edge Of Forever. His aggressive rhythm guitars and powerful but soaring guitar solos give a new life to the sound of the band. Still forged as a metal/hard rock guitarist, Aldo’s guitar work on the album allows the listener to have a new perspective of him as a player, with bluesy solos and melodic phrasings. Nik Mazzucconi is the only member left - with Alessandro - from the last album “Another Paradise” and his playing pairs perfectly with powerful drummer Marco Di Salvia, already with Alessandro in Hardline.
“Native Soul” is a deep and spiritual record. The Native concepts of Life, Faith and Love for Mother Earth come alive in songs like the title-track “Native Soul”, “Promised Land”, “Carry On”, “Wash Your Sins Away” and the a-cappella intro of the album “Three Rivers”, turning them all into anthems about life strength and motivation.