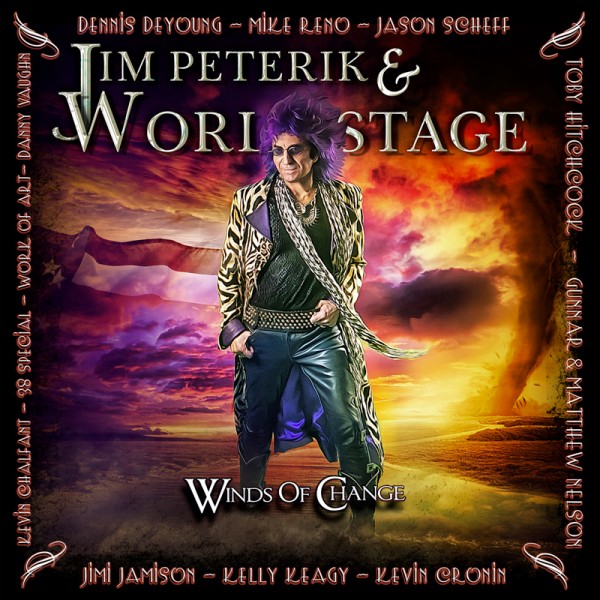 “Winds Of Change” is the follow-up to Jim Peterik’s now legendary “Jim Peterik’s World Stage” album. Set for release on April 26, 2019, The new album, “Winds of Change”, is another musical masterpiece featuring brand new Peterik songs in collaboration with a who’s who of melodic rock’s greatest superstars, including Kevin Chalfant (ex-The Storm), Dennis DeYoung (ex-Styx), Matthew and Gunnar Nelson, Kelly Keagy (Night Ranger), Lars Safsund and Robert Sall (Work Of Art), Toby Hitchcock (Pride Of Lions), Danny Vaughn (Tyketto), Mike Reno (Loverboy), Kevin Cronin (REO Speedwagon), Jason Scheff (ex-Chicago), and a very special previously unreleased track by the late great Jimi Jamison.
“Since the success of my first World Stage album back in 2001 and countless shows since, I have wanted to create a new musical legacy with this format,” says Jim. "Listening to voices blending as one has always inspired me, going back to the Beatles and other great vocal groups. I decided to do the same thing and began contacting artists I had the pleasure of working with through the years."
Jim Peterik and World Stage arose from the initial idea that the musical and spiritual collaboration of great artists and friends could be something truly special. The resulting album clearly displays the many talents of Jim Peterik, enhanced and embellished by a cast of noted singers and musicians.
Jim Peterik, through the years, has written or co-written some of rock's most memorable songs: "Vehicle" by the The Ides Of March (on which he was lead vocalist), "Eye Of The Tiger," "The Search Is Over," "High On You," and "I Can't Hold Back” hits for .38 Special such as "Hold On Loosely," "Caught Up In You," "Fantasy Girl," and "Rockin' Into The Night", "Heavy Metal" with Sammy Hagar, and many many more. Jim now a part of Pride of Lions with vocalist Toby Hitchcock, is one of the most esteemed and loved recording artists and songwriters, not only on the Frontiers label, but in the larger melodic rock community.