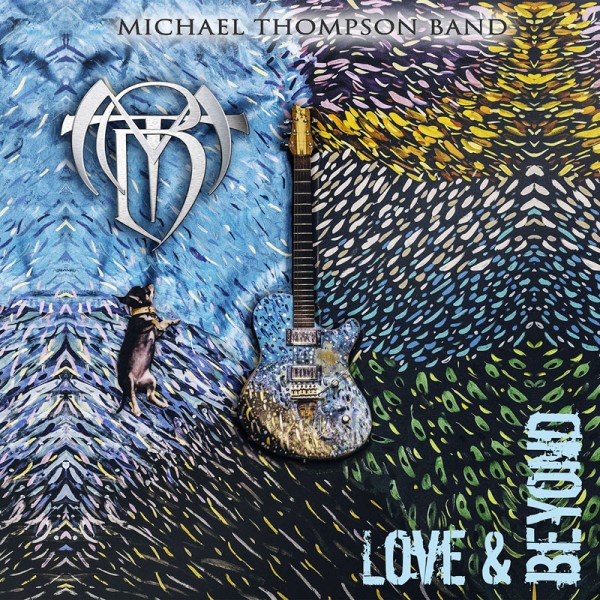 The Michael Thompson Band is back with their brand new album, “Love And Beyond” on April 26, 2019! For this new release, Michael wanted to go back to the more polished AOR sound of the band’s debut album. Once again, he teamed up with Wyn Davis for the mix and also had the amazing Mark Spiro involved in the songwriting and appearing on vocals together with the awesome Larry King and Larry Antonino. Best known for being Unruly Child’s bass player, Antonino delivers a phenomenal vocal performance which can only be defined as stunning. Another Unruly Child member, Guy Allison appears on keyboards, while drums on the album are handled by Sergio Gonzalez and Tim Pedersen.
Amongst musician circles, Michael Thompson is considered one of the leading guitar players in the world. He was awarded the "Distinguished Alumni" award from his alma mater Berklee College of Music to commemorate his contributions to the music industry. Berklee's program for the event noted that "he is widely regarded as being among the elite studio session players, and his amazing list of credits includes such prominent names as Michael Jackson, Whitney Houston, Celine Dion, 'N Sync, Toni Braxton, Phil Collins, Rod Stewart, the Scorpions, Vince Neil, Christina Aguilera, Michael Bolton, Mariah Carey, Bette Midler, Madonna, Babyface, En Vogue, Gloria Estefan, Stanley Clarke and Ricky Martin."
Originally from New York, Michael moved to Los Angeles in 1979 to begin a studio musician career. In 1988, after working to try and get a deal with his band Slang, he finally got signed by Geffen Records to release one album entitled "How Long", under the Michael Thompson Band (M.T.B.) monicker. On "How Long", more great studio musicians appeared as guests, in particular drummer-maestro Terry Bozzio, singer Moon Calhoun (ex The Strand), Pat Torpey (Mr Big), bassist Jimmy Haslip, John Elefante (Kansas), Toto's Bobby Kimball, and Great White associates Michael Lardie and Wyn Davis (who also produced the album). Songwriters would include, among others, AOR luminaries such as Jeff Paris, Mark Spiro, Billy Trudel and Brett Walker.
As of today, “How Long” is still regarded as one of the highest examples of hi-tech AOR / West Coast, with superb production and immaculate songwriting. Reissued in 2007 with 3 bonus tracks, it started a relationship between Michael Thompson and Frontiers, who put out the new Michael Thompson Band album in early 2012.
For the second album which Frontiers released in 2012, Michael teamed up with the awesome singer Larry King from the band Soleil Moon. Larry brought a new and more rocking approach to the MTB sound, but certainly the trademark elements of songwriting and melodies were still to be found on the “Future Past”.
Pure AOR can’t get much better than this!