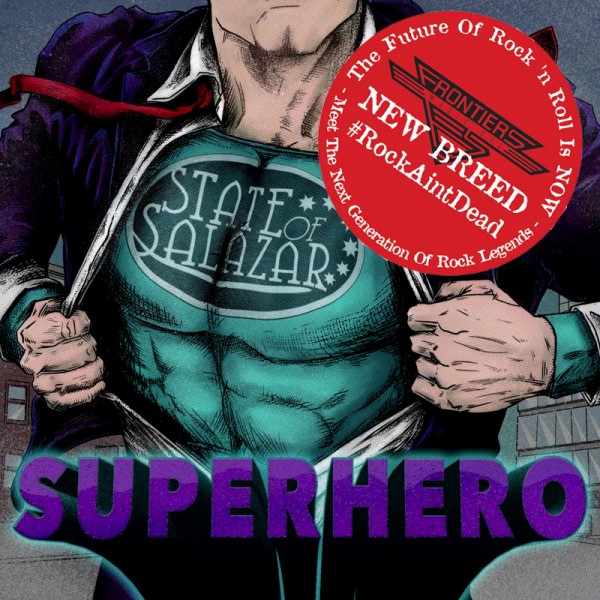 STATE OF SALAZAR is part of Frontiers’ New Breed family. The New Breed family is the label’s stable of young, exciting, up and coming bands who will be the future of hard rock and metal. The label is focused on finding and developing new bands that will show the world that rock is indeed far from dead.

STATE OF SALAZAR was started in 2010 by five students from the Malmö Academy of Music who wanted to play rock music made for the big arenas. The singer and songwriter, Marcus Nygren, came up with the concept for State of Salazar in 2009 when a couple of songs that he’d written did not fit his metal-based band 8-Point Rose. State of Salazar released their debut EP ”Lost my Way” in the summer of 2012, it spread fast in magazines and blogs and created a tidal wave of praise. The Swedish quintet received a lot of positive reactions from all over the world during a very short period of time. “This is something that can grow really big.” “...State Of Salazar will undoubtedly become one of the highlights of the genre.” “…this EP is an extremely polished piece of art...” “The performances and the production are superb…” And so on.
Following the EP release, the band entered the rehearsal room straight away to work on new songs for a planned debut album called “All The Way”. In early 2013 State of Salazar signed with the Frontiers label and in 2014 the album “All The Way” was released. It received a great amount of fantastic reviews and thanks to Frontiers the band reached out to a greater audience. They were also the first band to grace the stage of Frontiers Rock Festival in Milan.
Soon after the release of “All The Way” keyboard player Stefan Mårtenson chose to leave the band to pursue other things in life. Instead their long-time friend Kevin Hosford took his place as the band's new keyboard player. At this time the band had started working on their follow-up album “Superhero”. Kevin contributed not only as keyboard player but also as lead vocalist and songwriter.
Considering that bands such as Toto, Queen, Journey, Survivor and especially Bill Conti and Vince DiCola have influenced them, State of Salazar have a lot to prove. But they handle all this pressure with their honor intact and their heads held high. There is no mistaking that the band delivers “feel good” music, and it is no wonder, since one of the biggest influences is “training montage” music. This is just one of many reasons why State of Salazar actually stands out from many of the other bands in the same genre.
Their songwriting, arranging and instrumental performance show that this is a band that wants to develop and contribute to the melodic rock genre. State of Salazar is back with another total and absolute AOR masterpiece!

PRODUCED BY: State of Salazar

GUEST APPEARANCES:
Kristina Talajic – Lead Vocals on Lie To Me
Rasmus Nyvall – Saxophone on Love Will Find A Way