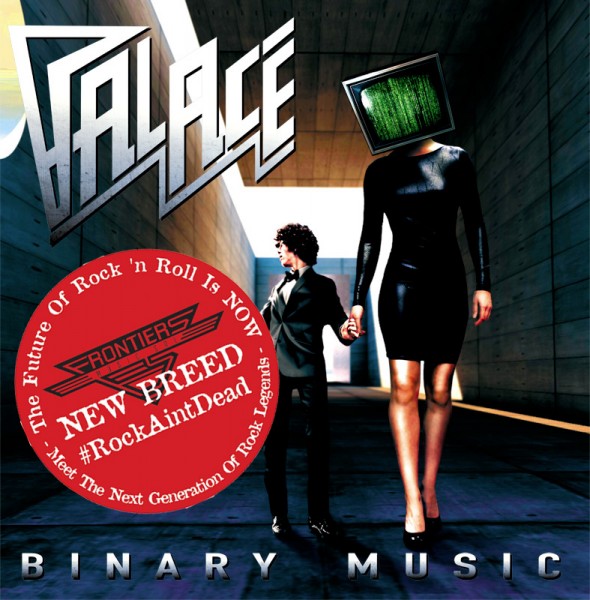 PALACE is part of Frontiers’ New Breed family. The New Breed family is the label’s stable of young, exciting, up and coming bands who will be the future of hard rock and metal. The label is focused on finding and developing new bands that will show the world that rock is indeed far from dead.

PALACE is a Swedish melodic rock band founded by lead singer and multi-instrumentist Michael Palace. Heavily influenced by 80’s imagery and sounds, Palace delivers a massive Melodic Rock/AOR sound unlike you’ve ever heard before. With layers of keyboards, Palace deliver a heavier sound than most in the genre, with guitars a dominating feature. Swirling keyboards, layers of guitars, and fast moving 80’s themed melodic hard rock is what is on offer on “Binary Music”. And everything is wrapped up in a very tight Daniel Flores (Find Me, First Signal, The Murder Of My Sweet) production.
Despite his young age, Michael Palace has accumulated a wealth of experience playing live and recording in the studio with several different acts, including ADRENALINE RUSH, REACH, ERIKA, HOUSTON, FIND ME, GUTTERDÄMERUNG, BIG TIME, and MILJENKO MATIJEVIC, to name a few.
Michael Palace began working with Frontiers as a songwriter and guitar player for First Signal (featuring Harry Hess of Harem Scarem fame), Cry of Dawn (with Goran Edman), Kryptonite (featuring Jakob Samuel), and Toby Hitchcock. The successful collaborations led to a worldwide record deal with Frontiers for his own musical output.
“Binary Music” is Palace’s sophomore effort and is sure to please the classic 80’s Melodic Rock/AOR crowd.