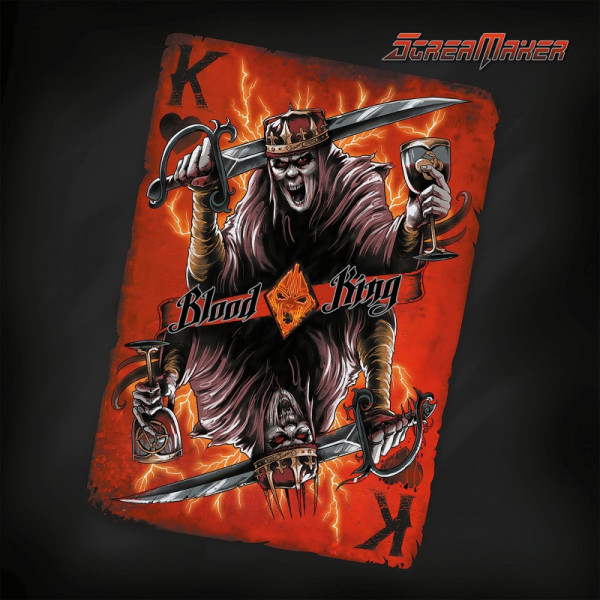 Frontiers Music Srl is pleased to announce the signing of Polish heavy metal band Scream Maker to the label. The band is currently working on a new studio album, which is anticipated for release in 2023. In the meantime, Frontiers will reissue the band's latest album, "Bloodking" on December 9, 2022 on CD/Digital.
Scream Maker formed in Warsaw, Poland in late 2010 when the original members, including current member Michał Wrona (guitar), gathered together out of a shared love of heavy metal. Wrona is joined in the current incarnation of Scream Maker by vocalist Sebastian Stodolak, bassist Jan Radosz, drummer Tomek Sobieszek, and guitarist Bartosz Ziółkowski.
Scream Maker has produced three full-length studio albums (2014's "Livin In The Past", 2016's "Back Against The World", 2022's "Bloodking"), plus one EP ("We Are Not The Same") and played over 300 shows in Poland and abroad, including gigs with luminaries such as Judas Priest, Motörhead, Megadeth, Saxon, Slayer, Nightwish, Primal Fear, Stratovarius, Onslaught, and many more.
The band recorded their debut album, "Livin In The Past" with producer Alessandro del Vecchio (JORN, Hardline, Revolution Saints) and the album featured guest appearances from Jordan Rudess of Dream Theater and Wojciech Hoffmann of Turbo. The album was released by Perris Records in April of 2014 in the U.S. and Europe and followed by a tour that included shows with Primal Fear, Paul Di'anno, Blaze Bayley, and more. In May 2014, the band toured China for the first time, playing six festivals and unexpectedly becoming the first Polish artist to have an album released by a domestic record label in China.
In the summer and autumn of 2015, between gigs with Saxon, Black Label Society, and Motörhead, Scream Maker gathered at HEAR Studio in Warsaw to record their second album, "Back Against The World". The album was crafted under the guidance of Radoslaw Kordowski, as well as, once again, Alessandro Del Vecchio.
The album was releasing in May 2016 and once again the band got busy playings shows in support of the album, including shows with Megadeth, KORN, Slayer, another tour of China (their third, but not last, as China has become a regular touring destination for the band), as well as the third edition of the Ronnie James Dio Memorial that they had started pack in 2014, but this time, the tribute included several shows. The band would organize a fourth edition of the Ronnie James Dio Memorial in spring 2017 and in December 2017, the band opened the first ever Polish concert by the Dio Returns tour. The band has continued with the Ronnie James Dio Memorial shows as the years have gone on, turning it into a regular tradition.
Once the global pandemic hit in 2020 and slowed the band's regular busy touring schedule, they focused on fine-tuning and recording material for their third full-length album, "BloodKing," which was released in January 2022.
The album was mixed by Tomasz "Zed" Zalewski, with two songs, "When Our Fight Is Over" and "Hitting The Wall" being mixed by Alessandro Del Vecchio, and was very well received by both fans and critics, with Metal Hammer Poland giving it a glowing review. With touring opening back up, the band got busy playing gigs again and in early September 2022, they have planned their own two-day festival in Warsaw (with Polish legends Turbo headlining), which will also include another edition of the Ronnie James Dio Memorial. In the fall of 2022, the band will embark on another tour with the Ronnie James Dio Memorial, after which they will devote themselves to writing and recording their fourth full-length album.