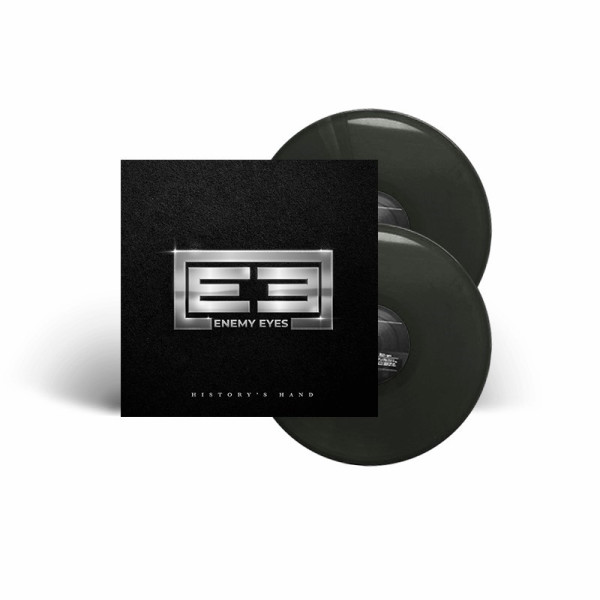 Johnny Gioeli, a career vocalist whose credits include Hardline, Axel Rudi Pell, and Crush 40, has announced the formation of a new band, Enemy Eyes. Enemy Eyes is a fulfillment of a vision of Johnny's to create a new band that combines his fondness for classic hard rock and European metal. The band's debut album, "History's Hand" will be released on November 18, 2022 via Frontiers Music Srl.
Of note, this will be Gioeli's 100th official release as a recording artist after decades of multi-platinum, gold, and critically acclaimed albums. A true landmark recording in his discography and also the beginning of a new chapter.
"Enemy Eyes is the final product of a vision I've had for many years of combining old school rock with a European metal feel.  At the end of the day, I can sing many styles of music, but my heart and soul is metal. It is known to my fans as I wring the sweat out of my shirt each night on stage. I want to feel what I sing. I grew up with the music of DIO, Rainbow, [Black] Sabbath, [Iron] Maiden, and more. I needed to fulfill what I feel is a missing piece in my musical puzzle, so Enemy Eyes has been born. It’s not just a project, it’s my music life’s work moving forward," says Gioeli.
Johnny Gioeli first came to prominence with Hardline, a melodic hard rock band that he formed with his brother Joey and which famously featured Journey guitarist Neal Schon on the band's debut album, "Double Eclipse". Johnny has continued to front Hardline since the release of their debut album in 1992, including their most recent release, 2021's "Heart, Mind And Soul". In addition to Hardline, Johnny has been fronting both German guitarist Axel Rudi Pell's solo band and Japanese-American band Crush 40 since 1998. He also released his first solo album, "One Voice" in 2018.
Needless to say, Johnny brings Enemy Eyes to life with a wealth of experience and a clear-eyed vision of where he is going with the band. "This is completely different from Hardline, ARP, and Crush 40. Completely different. It is a definitive new music entrée on the menu of my career and one I've been hungering for," says Gioeli. "The influences are many. From the metal music I grew up with to more modern bands like Breaking Benjamin, Volbeat, Architects, and on and on. This combined with my love for melodic and Euro metal, to me, helps Enemy Eyes become a fresh world of metal," he adds.
As he has done with his other acts, Gioeli plans to bring Enemy Eyes to the stage to bring the message and power of the music directly to fans. A seasoned musician who is now in his fourth decade of touring the globe, he doesn't know any other way.
Asked about the meaning of the album's title track, Gioeli explains, "'History’s Hand' is a very special song. The chorus' finishing line “born a child, feared as a man” sums up my vision of awareness, innocence to evil, and how we become what our history dictates.  Sort of the “history repeats itself” thought process. Recognizing that all things come full circle in time and we should be reminded of this regularly…sometimes with a good fucking slap.  “feel the hit of History’s hand”. We are the architects of our history. Don’t fuck it up. It felt right to make this the album title."
Stay tuned for announcements about tour dates and more info on Enemy Eyes by following the band's social media as well as Gioeli's.