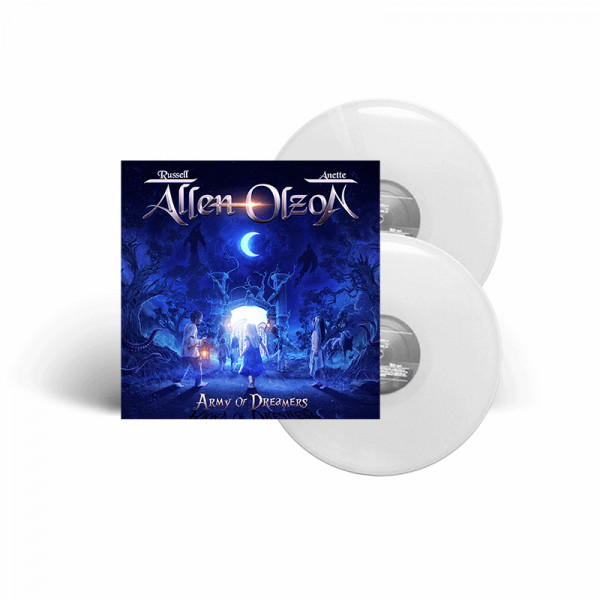 Exclusive to Frontiers Shops! Limited to 250 copies in this Shop!

Frontiers Music Srl is pleased to announce that the dynamic trio of Anette Olzon, Russell Allen, and Magnus Karlsson have crafted a follow-up to the well-received debut Anette/Olzon album, "Worlds Apart"! The follow-up album, "Army Of Dreamers" once again pairs two world class singers in Olzon and Allen together for a tour-de-force of stunning melodic metal that only the ever-talented Karlsson could craft.
As fans have come to expect over the course of the initial Allen/Lande albums and the debut from Allen/Olzon, "Army Of Dreamers" is purebred melodic metal of the highest order.
Inimitable singer Russell Allen (Symphony X, Adrenaline Mob) and acclaimed Swedish guitarist, songwriter, and producer Magnus Karlsson (Primal Fear, Magnus Karlsson’s Free Fall) have collaborated successfully on three critically acclaimed albums where Russell dueted with Norwegian singer, Jorn Lande. After a break in their collaboration on said albums, where Timo Tolkki stepped in and oversaw an album, Magnus returned to the fold, but with an exciting new twist to the formula. This time, Russell and Magnus welcomed none other than the amazingly talented Anette Olzon (ex-Nightwish, The Dark Element) to the fold as Allen’s vocal partner and offered up an unbelievable debut album, "Worlds Apart".
"The entire point of this album is to put two legends together, and it succeeds at that indubitably.  I do have to say, though, that Magnus’ guitars are flawless, giving us huge and meaty walls of riffs that are strangely satisfying. His keys are incredibly orchestral in style, too, meaning that they give the album this towering, hyper-melodic sound.  Anders, then, gives us the oomph and thunder that completes the sound, as his drums roll and break with perfect execution." - The Prog Mind
"As the album continues it becomes difficult to pin down a specific song that stands out more than any other song.  This is the sign of a great album.  Instead, compare Worlds Apart to a road trip to your favorite places in life.  There are the winding turns that you feel the pace slow to account for the turns.  Then you hit a straight stretch and your speed naturally increases as you let the beat and passion of the music take you faster and faster." - Brutal Planet Magazine
"This album is well-produced, and the writing is the good stuff we have come to expect from Magnus. The guitar parts are absolutely top-shelf. Russell Allen and Anette Olzon both deliver superb results in line with their previous body of work." - Sonic Perspectives
If you love the debut Allen/Olzon album, Allen/Lande’s first three albums, but also Delain, Within Temptation, Nightwish, and the like (but with a slightly heavier edge), then this is simply an absolute must hear for your melodic metal loving ears!