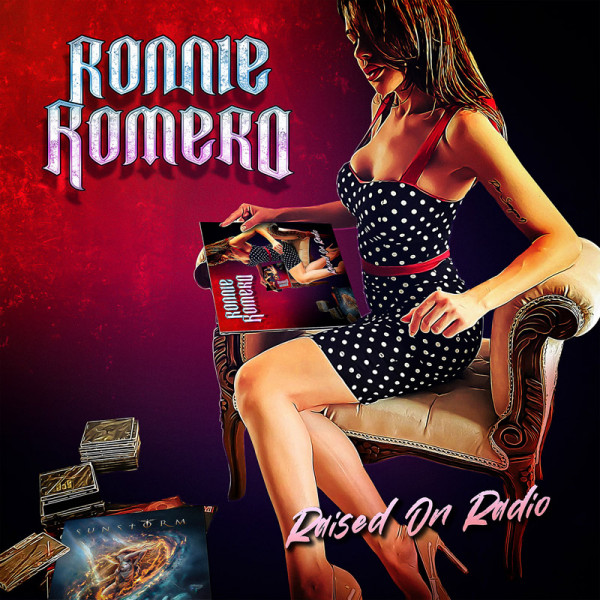 One of the great up-and-coming hard rock singers of our time, Ronnie Romero has announced the release of a unique covers album, "Raised On Radio". The album features covers of classics that have meant something special to Romero over the years and helped forge this talented singer's musical style. Songs by legendary acts like Survivor, Bad Company, Foreigner, Queen, Led Zeppelin, and more are given Romero's talented vocal treatment here. Joining Romero is a stellar cast of musicians, including Srdjan Brankovic (The Big Deal, Alogia) on guitar, Javi Garcia on bass, Andy C (ex-Lords of Black) on drums, and Alessandro Del Vecchio on keyboards, who also handled production, mixing and mastering.

Serafino Perugino, President & Head of A&R for Frontiers, obviously already had a working relationship with Romero through Lords Of Black and The Ferrymen, but knew Romero had the pipes to sing Melodic Rock/AOR (hence why he brought him in to sing for 2020's "Afterlife" by Sunstorm). As the two discussed Romero working on a solo album for the label, Perugino brought forward the idea of Romero covering classic AOR and Classic Rock artists for a covers album. Romero, being a fan of these styles already and influenced by them in his formative years, knew he could easily pick a killer list of songs that suited his tastes and thus, "Raised On Radio" was born.

Through Romero's career thus far, he has performed killer renditions of several rock classics as part of his shows fronting legendary acts like Rainbow and the Michael Schenker Group (MSG). He's also covered classic songs by Journey, Queen, Rainbow, and more with Spanish metallers Lords Of Black. So, with trying his hand at covers by legendary artists being familiar territory already, “Raised on Radio" were waters that Romero was already comfortable wading into.

But rather than go for covers of well known mega-hits, Romero and company went for, in most cases, lesser known, deep cuts from these legendary bands. Because after all, when you truly love a band, you know those gems buried beneath the surface on their hit albums. Such gems by Queen, Kansas, Elf, Uriah Heep, Bad Company, Foreigner, and more are taken on here with passion and enthusiasm by Ronnie and his backing band of supremely talented players.

Romero's voice and prolific musical activity have brought him to the forefront of the hard rock/metal scene where he can be seen/heard with Lords of Black, The Ferrymen, Sunstorm, Rainbow, and the Michael Schenker Group. Ambitious and driven as always, this record is a special treat for fans while Romero continues work on his debut solo album, which is being worked on at the moment.