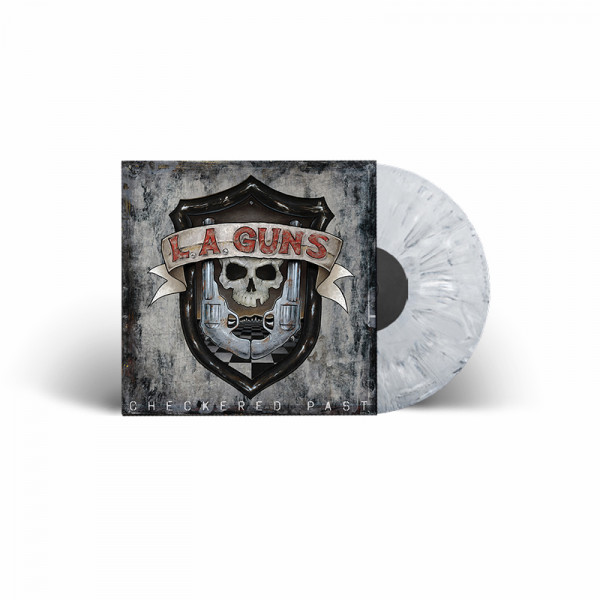 Long running hard rockers L.A. Guns have announced the release of their new studio album, "Checkered Past". Written and recorded while the world was still in the grips of the coronavirus pandemic, the new studio album sees Tracii Guns, Phil Lewis, and company continuing with the darker lyrical tone of the preceding studio albums, "The Devil You Know" and "The Missing Peace", while incorporating their classic rock influences into the mix. Heavier songs are mixed with bluesier, boogie inducing tracks and dark, introspective ballads, often harkening back to the first three albums the band made, but also pushing the band forward. When fans absorb the album as a whole, they'll see that the tracklisting is divided up into 'sets' or 'suites', where a sonic style is explored across multiple songs before moving on to the next, making for a remarkable listening experience.
Guns, Lewis, and bassist Johnny Martin, guitarist Ace Von Johnson, and drummer Scot Coogan will hit the road in support of the album with announcements coming soon about more dates. Road dogs that they are, the band is itching to get back out on the road and showcase these songs in the environment they so love, the live stage.
As the revival of the classic ‘80s hard rock and heavy metal scene continues unabated here in the 21st century, one reunion had been at the top of the wishlist of many a fan for a long time: the songwriting combination of Tracii Guns and Philip Lewis under the L.A. Guns banner. What once seemed like a distant memory with no hope of returning has now come around and fans have been rewarded with two new studio albums, two live albums, and a special Christmas covers EP since 2017. Clearly the creative fires of Guns and Lewis are burning bright.
Since their self-titled debut in 1988 to the widely praised comeback albums "The Missing Peace" and "The Devil You Know", L.A. GUNS, led by Tracii Guns and Phil Lewis have always delivered solid rock ‘n roll to their fans. This current incarnation of the band has been touring non-stop and the cohesiveness of the unit, not to mention Phil’s stunning and unique vocals and Guns’ mind-bending guitar playing, are on full display here. A must hear and listen for all fans of the band, both new and old.
L.A. Guns never looked like the pretty poster boys that so many of their peers did, but more the band that you would be terrified to bump into in an alley as they would likely be carrying switchblades and ready for a fight. But despite having many songs to back up that image, the band could also write powerful ballads (see the smash hit, “The Ballad Of Jayne” for Exhibit A of this argument) that showed there were some serious songwriting chops in the band. Those chops are on full display on the band's two most recent studio albums and the upcoming new album, "Checkered Past," arguably one of the most vital and exciting releases in the band’s catalog.
The story of how we got from the band’s powerful early years to a third new studio album in the relatively short time that Guns and Lewis have reunited has already been well documented, so no need to rehash it. What’s important to know and understand is that the driving force of all those classic L.A. Guns songs was Tracii and Phil. Feeling inspired and excited like they did when they first started out, but with many years of wisdom and experience under their belts, and most importantly, a renewed and stronger creative and personal relationship, Guns and Lewis are at a creative peak. "Checkered Past" shows a band invigorated and ready to bash you over the head, as well as “wow” you with some epic, slower songs, and even make you dance a bit to some rock 'n roll.