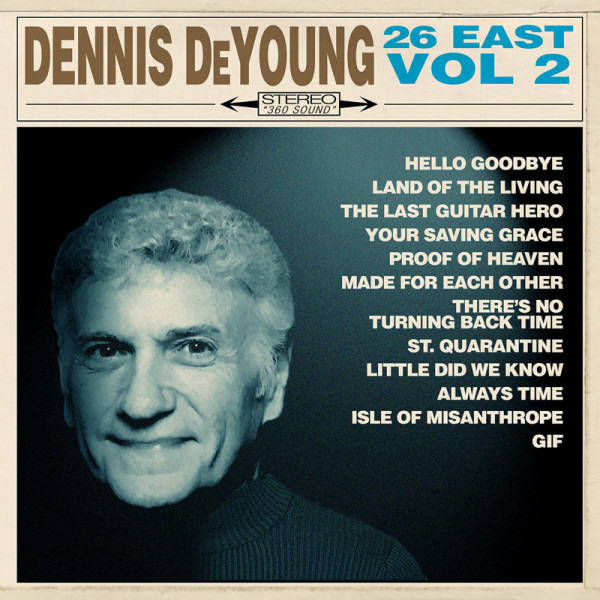 Former Styx frontman Dennis DeYoung is back with the second volume of his fond farewell to recorded music, "26 East, Vol. 2.” As with the preceding volume, "26 East, Vol. 2" once again hints strongly at DeYoung's rock roots with Styx. The production and musicianship are EPIC, and those timeless vocal arrangements get delivered in spades. A fitting goodbye and a final signature on an outstanding body of work which will stand the test of time!
DeYoung has previously stated that "26 East” will mark his retirement from the world of recorded music. It was thanks to Frontiers CEO, Serafino Perugino, that given the abundance of material, Dennis agreed to split the album in two parts. This second half starts where the previous one left off and sees DeYoung collaborate again with the awesome Jim Peterik, a fellow Chicagoan and nearby neighbor, for the songwriting on select tracks.
"The last album was supposed to be my final album, but there were so many songs written that Serafino Perugino, CEO of Frontiers, suggested dividing it into two albums rather than one,” DeYoung states.
“26 East” was the address where DeYoung grew up in Roseland, IL on the far south side of Chicago. This is where the band was formed in his basement in 1962. Across the street lived the Panozzo twins, John and Chuck, who along with DeYoung would go on to form the nucleus of Styx.
The process that brought forth the album beginning in the first place started when Jim Peterik, a fellow Chicagoan and nearby neighbor, sent a song to Dennis.
"If not for Jim Peterik’s encouragement, talent and prodding I would not have recorded this music,” says DeYoung. "He once told me the world needed my music; to which I replied 'have the world text me for verification.' We collaborated from the get go, happily and seamlessly and at this time we have written 9 songs together of which five will be on Volume 1. Just two Chicago guys doing what they do best, making music and having a laugh.”