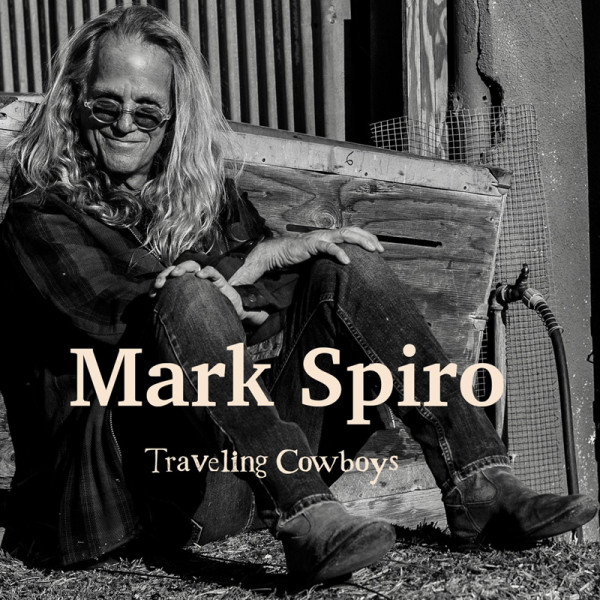 Mark Spiro’s new solo album “Traveling Cowboys” comes about one year after the career spanning “Best of” album which Frontiers released as a celebration of this great songwriter’s career. Once again, Mark Spiro continues a legacy of excellent songwriting, which he has always done in a very personal and heartfelt way.
On “Traveling Cowboys,” Mark once again writes and sings songs about life, love, sacrifice, heartbreak, and everything in between, while wrapping everything up in a smooth melodic rock blanket.
Mark was helped on the record by Tim Pierce and Gia Sky, but more notably, appearing on “7 Billion People” as a duet partner with Mark is none other than Julian Lennon.
"Traveling Cowboys” is another album of which Mark Spiro can be truly proud. It showcases a man with a talent for writing catchy yet thoughtful songs, songs that any fan of good music will enjoy listening to.
Mark Spiro is an iconic American songwriter and an established award winning producer, recording artist, and accomplished musician, with a career that spans over two decades. Among his many accomplishments are 45 Gold and Platinum Records, and nine solo albums. His songs and productions have been represented on records that have sold over 100 Million copies worldwide.


MORE ON MARK SPIRO:
Born in Seattle, Mark moved to Hollywood where he met Jack White, an extremely successful and acclaimed German producer who was making his impact on the American music scene through his work with Laura Branigan, Stevie Woods, Anne Murray, David Hasselhoff, and more. He immediately recognized Mark’s enormous talent and brought him in as his general co-producer. In the span of three years, Jack cut more than 100 of Spiro’s songs for his various American and German artists.
It was at this time that Mark met German writer/producer, Harold Faltemeyer, best known for his songs ‘Axel F’ from the film, “Beverly Hills Cop”. Faltemeyer was a huge fan of Mark’s writing and production skills and asked him to write a song for a new film, “Top Gun”. Mark wrote the incredible ‘Mighty Wings’, recorded by Cheap Trick, for the film. Developing a reputation in the film industry for his soundtrack work, Mark wrote songs for such films as, “True Romance (“In Dreams” recorded by John Waite), “Selena” (“Only Love” recorded by Selena), and ”Music From Another Room” (“Day After Day” recorded by Julian Lennon). Mark’s songs have also been featured on several television series such as “One Tree Hill”, “Marker”, and “Fame”.
He is also recognized as one of the leading melodic rock songwriters in the United States, with songs recorded by such classic artists as Heart, Cheap Trick, Giant, Bad English, John Waite, Kansas, Reo Speedwagon, Winger, Mike Reno (LoverBoy), and Julian Lennon. In addition, he has written for multi-platinum country artist  Lila McCann, and Latin artists, Luis Miguel and Emmanuel.
In addition, he has produced songs by Anne Murray, Laura Branigan, John Berry, Mike Reno (Loverboy), Maria Conchita Alonso, and a new artist, Ruby Summer for Lyric Street Records. Although he is best known for his melodic rock style, it is evident that Mark Spiro has the ability and talent to write for any style and genre of music.
Mark recorded and released his first solo album “In Stereo” in Germany in 1986. Shortly thereafter, Mark was signed to Interscope Records by Jimmy Iovine as a solo artist. Mark’s second solo album, “Care Of My Soul” was released in Japan, Australia, and Scandinavia in 1994; a unique pop/rock album with Mark’s special trademark of haunting melodies, creatively imaginative lyrics, and outstanding vocals.
1996 saw the release of “Now Is Then, Then Is Now” on Westcoast Records, which was a perfect melodic rock record that received unanimous acclaim in the European rock press for being one of the absolute finest releases that year.
Mark Spiro’s next two albums, “Devotion” and “The Stuff That Dreams Are Made Of”, were released on the German label MTM Music and released throughout Europe and Scandinavia. His most recent albums, “King of Crows” (2003), and “Mighty Blue Ocean” (2005) were also released throughout Europe and Scandinavia.