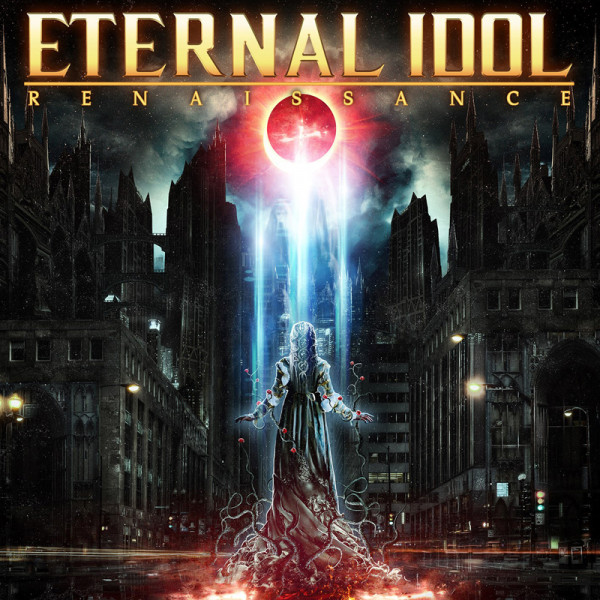 Eternal Idol returns with a revamped, re-energized line-up and an exciting new album, “Rennaissance” this November. Featuring Fabio Lione (Rhapsody, Angra) and Claudia Layline on co-lead vocals, guitarist Nick Savio (Hollow Haze), bassist Andrea Burratto (Secret Sphere, Hell In The Club), and drummer Enrico Fabris, Eternal Idol’s sophomore album is an epic maelstrom of symphonic/melodic metal that will delight fans of the genre who treasure intense songwriting and impeccable vocal performances.
Once again, Fabio Lione took care of most of the lyrics and vocal melodies, while Nick Savio worked hard on songwriting and arrangements. New vocalist Claudia Layline also added her personal touch on all the songs as well. The album was recorded between the end of 2019 and early 2020, produced by Nick Savio, and mixed by Simone Mularoni (DGM, Sunstorm). “Renaissance” represents a promise and a statement from Eternal Idol: to be one of the absolute best Melodic Metal releases of the year!
Eternal Idol is a symphonic metal band which was put together by Rhapsody and Angra vocalist Fabio Lione Italian guitarist Nick Savio of Hollow Haze. Their plan was to create a new and original sound which could catch symphonic metal fans by surprise. In fact, Eternal Idol offers an intriguing mix of classic metal, symphonic rock, and a few progressive metal twists.
The band’s debut, “The Unrevealed Secret” was released in December 2016 and received an overall excellent response. The band toured Europe and Italy in support of the release in early 2017. Unfortunately, some internal tensions surfaced after the touring and singer Giorgia Colleluori and drummer Camillo Colleluori left the band. Nick and Fabio later regrouped and brought in up-and-coming vocalist Claudia Layline and drummer Enrico Fabris. Basssist Andrea Buratto (Secret Sphere, Hell In The Club) completes the lineup. Reenergized and with a brand new album under their belt, the band is now ready to once again unleash its baroque metal sound on the world!