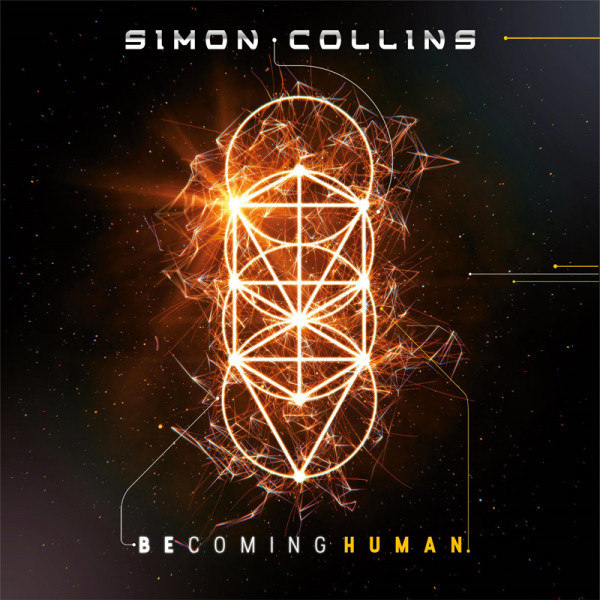 Simon Collins returns with his fourth solo album, “Becoming Human”, an album where he takes the musical inspiration of his previous band Sound of Contact and creates a strong and exciting mixture of rock, pop, prog, electronica, and dare we say, a hint of industrial. Simon has managed to master the sound of prog that the fans love so much, but keep it original sounding as well.
Simon Collins has literally spent his life immersed in music. Inspired by his legendary father, the one and only Phil Collins, Simon picked up the drumsticks at a very early age. And like his dad, his creativity and musical instincts eventually led him to the piano, where he began penning original material. Collins’ diverse tastes and burgeoning interest in songwriting weren’t reflected in some of the earlier bands in which he played, bands far more interested in simply utilizing his undeniable strength behind the drum kit.
In 2000, Collins’ demos caught the attention of WEA Germany, which brought him to Frankfurt to record his trance-fueled debut, “ALL OF WHO YOU ARE.” Though the collection yielded two hit singles and sold substantial numbers, Collins felt constrained by its synth-based sonic nature. In 2003, he severed his relationship with WEA and started his own Lightyears Music label and self-released 2005’s “TIME FOR TRUTH,” which incorporated organic instrumentation and a provocative and political lyrical slant.
In 2007, Collins with keyboardist and co-producer Dave Kerzner (Kevin Gilbert's Thud, Giraffe) recorded a cover of the Genesis track "Keep It Dark" as a tribute to the 40th anniversary of his father's band. During production, he met Kevin Churko, who mixed and mastered the recording. This led Collins to a working relationship with Churko on what would be Simon's next album “U-CATASTROPHE.”
Moving on he formed a new progressive rock band Sound of Contact, which in 2013 saw the release of their debut sci-fi concept album ‘Dimensionaut’, which was immediately met with rave reviews and critical acclaim. Co-produced by Collins and Sonic Reality's Dave Kerzner, the band hears Collins behind the kit as well as being the lead singer.  He was joined on the album by Matt Dorsey with musicians Dave Kerzner, Kelly Nordstrom, and a guest appearance from Hannah Stobart. Sound of Contact created a unique sound, while paying homage to the greats of classic and progressive rock. They were voted "Best New Band" taking home the "Limelight Award" at Prog Mag's 2013 Progressive Music Awards and also topped many music critics' "Album of the Year" polls.