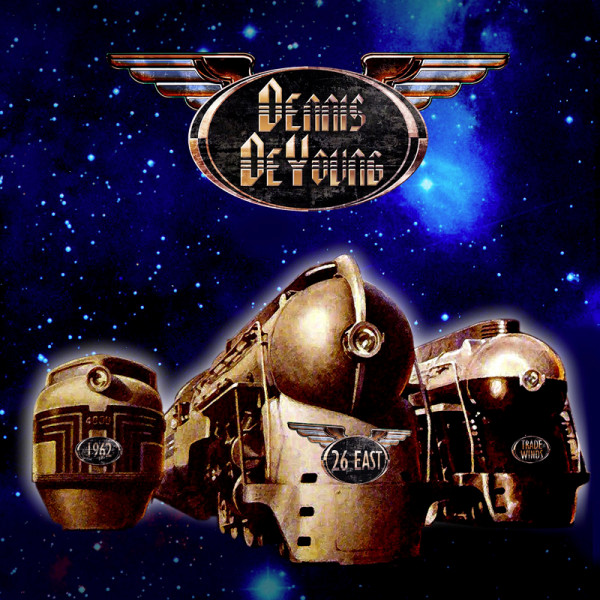 Former Styx frontman Dennis DeYoung is back with his sixth original solo studio, album "26 East: Volume 1.”
“26 East” was the address where DeYoung grew up in Roseland on the far south side of Chicago. This is where Styx was formed in his basement in 1962. Across the street lived the Panozzo twins, John and Chuck, who along with DeYoung would go on to form the nucleus of the band. The cover artwork features three locomotives traveling through space, representing the original members leaving Chicago on their journey to the stars.
“On this, I decided to write songs about my journey from humble beginnings in my basement on Chicago’s far-south side to the very top of my chosen profession,” the singer states.
While DeYoung previously announced this will be his last album, more recently he revealed that “there were so many songs written that Serafino Perugino, CEO of Frontiers, suggested dividing it into two albums rather than one,” DeYoung states. “This is Volume 1, which sounds pretentious to me, but the marketing folks wanted you to know there are going to be two of them, so hey kids, there are two of them; this is Volume 1!"
One of the special moments on “26 East” is a tribute to DeYoung’s musical idols, The Beatles. “If you know me, you know of my love for the Beatles and their effect on my life and millions of other musicians.” DeYoung notes that the Beatles-inspired track is a duet, and he recruited Julian Lennon, son of John, to duet with him. “I wrote an email to him and was just about to send it when I listened one last time and suddenly realized Jules should not sing this song,” he explained. “It was my story not his.” Instead, DeYoung went to his piano and wrote an entirely new tune for he and Lennon to collaborate on. Calling their recording session a “dream come true,” DeYoung said the new duet sounds “even better than I had imagined.” The collaboration with Julian Lennon came about when DeYoung wrote a verse and chorus of a song with Lennon in mind. Lennon heard the demo and said he would be honored to participate. Lennon's vocals were recorded in October at Mission Sound in Brooklyn, NY.
DeYoung shares, "The moment we sang together in the studio it felt magical. I wrote the song specifically for our two voices. I had never met Julian previously but I have been an admirer since Valotte."
The process that brought forth the album begining in the first place started when Jim Peterik, a fellow Chicagoan and nearby neighbor, sent a song to Dennis.
"If not for Jim Peterik’s encouragement, talent and prodding I would not have recorded this music,” said DeYoung. "He once told me the world needed my music; to which I replied 'have the world text me for verification.' We collaborated from the get go, happily and seamlessly and at this time we have written nine songs together of which five will be on Volume 1. Just two Chicago guys doing what they do best, making music and having a laugh.”
To kick-off the release of the album, DeYoung will appear at the House of Blues Chicago on April 3, 2020.. Every attendee will receive a physical copy (CD) of “26 East”. In addition, the album will be played in its entirety on the house PA, followed by a Q&A session with DeYoung and Jim Peterik to discuss the new music. A live performance of The Music of Styx will follow after that. Attendees can expect to hear a few songs from the new album performed live. In support of the release of “26 East,” DeYoung will tour heavily throughout 2020.