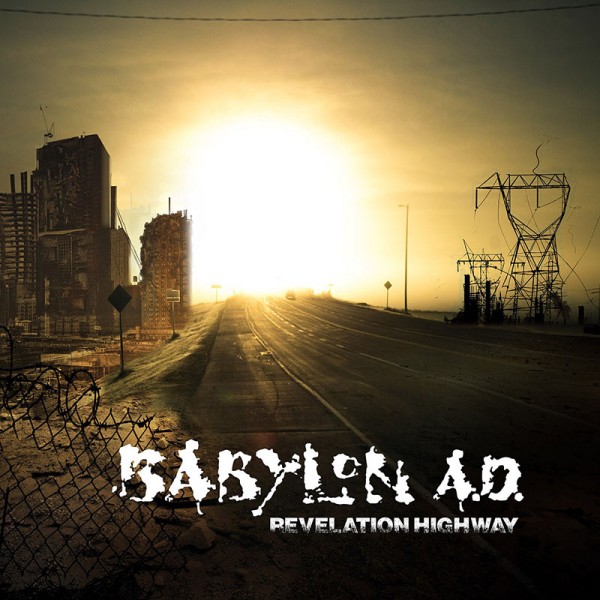 Babylon A.D. are proud to be one of the few hard rock bands from the late ‘80s/early ‘90s that are still operating with all of their original members: Derek Davis, vocalist/songwriter, guitarists and songwriters, John Mathews and Ron Freschi, drummer Jamey Pacheco and bassist Robb Reid. The band formed in 1987 and to celebrate their 30th Anniversary, the band will release their new album, REVELATION HIGHWAY on November 3, 2017.

Featuring 10 tracks of the energetic classic hard rock the band is known for, REVELATION HIGHWAY is sure to please fans of the band’s classic early material. The band will play shows in the UK and Germany this August/September to kick off promotion for the album with more touring planned both in the U.S. and UK/Europe!

Formed in 1987, Babylon A.D. hail from San Francisco, CA. In 1988, Babylon A.D. caught the attention of Arista Records President and music industry legend “Clive Davis”, who signed them at a live showcase in Los Angeles. Their self-titled debut was released in fall of 1989 and included their hard rock classics “Bang Go The Bells”, “Hammer Swings Down”, and “The Kid Goes Wild”. The band scored three #1 songs at metal radio and reached gold sales status in the U.S. on their first release, which spent 38 weeks on the Billboard Top 200, peaking at #46. Their sophomore effort, “Nothing Sacred” was released in 1992 and produced two more Top Ten metal songs, “Bad Blood” and “So Savage the Heart”. Constant touring throughout the early 1990s and several MTV videos made them one of hard rock fans’ favorites.

After spending several years on Arista Records the band signed with Apocalypse Records in 1999 and released “Live In Your Face”, a compilation of live tracks recorded at various cities’ throughout the United States and on July 4, 2000, the band released their third studio album, “American Blitzkrieg”. In 2008, the band released “In The Beginning” on Apocalypse/Perris Records, a compilation of songs from the original demo tapes that secured them their recording contract with Arista Records. In 2014, Babylon A.D. returned with a four song E.P., “Lost Sessions/Fresno, CA 93”, a collection of songs that had been found on an old reel tape that had never been released. The band played several dates across the U.S. and also played the “Firefest Rock Festival” in Nottingham, England.

In March 2015, the band released a live record “LIVE@XXV” to celebrate their 25th Anniversary. That same year, they were invited to play the “Monsters of Rock Cruise” and select dates across the U.S. 2016 saw the band play more rock festivals along with The “Bang Your Head” Festival in Balingen Germany, Chicago’s “Rock’N’Skull” fest and once again the “Monsters of Rock Cruise”.

The band has recently finished their fourth studio album titled “Revelation Highway'” which is scheduled for release on November 3, 2017 on Frontiers Music Srl.