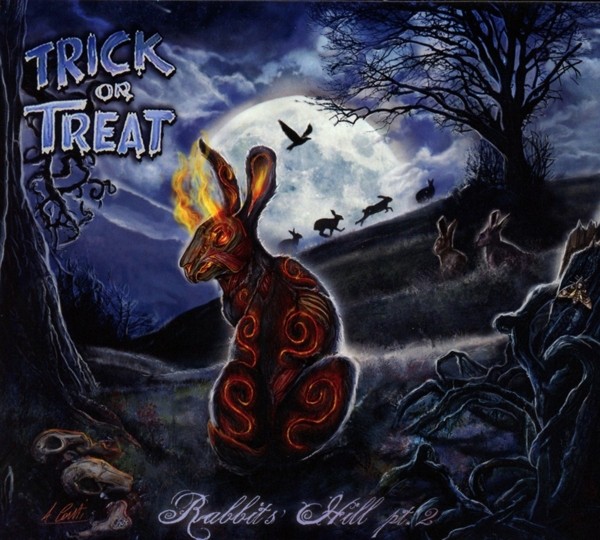 Description
Description
Trick Or Treat are certainly a crazy bunch of guys while they are an absolute and super-tight... more
Close menu
Product information "TRICK OR TREAT - Rabbits? Hill Pt.2 - CD Jewelcase"

Trick Or Treat are certainly a crazy bunch of guys while they are an absolute and super-tight Power Metal band, at the same time they like to share some fun with their audience. Probably this is why everybody loves them! Formed originally in 2002 as a tribute band to Helloween, Trick Or Treat soon become a very popular live attraction in their area and after their first original demo, they got signed by an italian indie  Valery Records - and released their first full length album entitled Evil Needs Candy Too in 2006, to a terrific critical response. The band then spent the following 2 years on the road playing over 100 gigs in Europe and the USA. In the meantime, the guys kept writing songs and in 2009 Tin Soldiers, their second album, was released. The record sees Michael Kiske (Helloween, Place Vendôme) guesting on two songs and Michele Luppi (Whitesnake, Secret Sphere) on another one. More touring followed with many festival appearances and a tour with Helloween and Stratovarius in 2010/11. 2012 was an important year for Trick Or Treat. First because singer Alessandro Conti was chosed by Luca Turillis Rhapsody to be the lead singer on the album Ascending to Infinity. Then because the band released the first chapter of the concept Rabbits Hill pt.1, based on Richard Adams novel Watership Down. The second chapter is now finally available and comes with the news of the band signing a worldwide multi-album deal with Frontiers Music Srl. The recording sessions for the new album have been the longest ever and the work with producer Simone Mularoni (DGM) was done with special care for all the details. The band added huge orchestrations and epic choirs mixed within the usual signature Power Metal sound, in order to reflect all the epic adventures told in the story. Also the musical atmospheres range from acoustic and melodic parts to darker and heavy metal anthems. Once again on this new album, Trick or Treat had the honor to work with great international guests and friends like Tony Kakko from Sonata Arctica, Sara Squadrani from Ancient Bards - Ayreon and, in the role of the evil general Woundwort, Tim "Ripper" Owens (ex-Judas Priest - ex-Malmsteen). TRICK OR TREAT are now finally ready to attack the Metal fans all over the world!